Where to celebrate Thanksgiving in the National Parks

While national parks may not be the first thing that comes to mind when thinking of Thanksgiving, it can be a terrific place to celebrate the holiday. Thanksgiving in the national parks is a tradition for many families. Whether it’s a historical reenactment or participating in the #optoutside movement, here’s a list of places around the National Park Service you can enjoy with family and friends.

While it’s not widely publicized, late-November in Death Valley National Park can be one of the best times to visit. Temperatures begin to moderate with average highs in the mid-70’s and the crowds of summer travelers have long gone home. You’ll find the campgrounds mostly full during Thanksgiving weekend with many visitors celebrating Thanksgiving at the Furnace Creek Inn

While the exact location of the first Thanksgiving in Plymouth Colony is unknown, we do know some things about the celebration held by the Pilgrims and the Wampanoag Indians. At the time the Wampanoag people lived throughout New England, farming corn, beans and squash. Today though, much of their historic homeland lies within Cape Cod National Seashore in Massachusetts. Spend your Thanksgiving holiday weekend visiting and learning more about how the Cape Cod landscape shaped the Wampanoag way of life.

For this special Thanksgiving gathering, our talented kitchen staff will create a delicious Thanksgiving feast — using fresh, local and organic ingredients as much as possible — that will blend traditional holiday elements with some fun new regional twists.

When most of us think of Thanksgiving, we think back to the early colonial days. It’s fitting then to spend a portion of the holiday weekend visiting Colonial National Historical Park in Yorktown, Virginia. Visitors can take in re-enactments, see historic Jamestown with traditional holiday decorations, and experience what the early colonial settlers encountered here in America.

If you’re looking for the most luxurious Thanksgiving in the national parks, then look no further than Yosemite. The legendary feast served in the Dining Room of The Ahwahnee Hotel books months in advance, and will likely set you back $150 per person.  Each year the Executive Chef plans a five-star menu complete with pumpkin pie. If you missed the chance to dine at Ahwahnee, the Yosemite Valley Lodge and the Wawona Hotel also have Thanksgiving meals.

Another bit of Thanksgiving trivia to impress your family around the Thanksgiving table. Did you know that President Harry S. Truman is often wrongfully believed to be the first U.S. president to pardon a turkey? There’s a famous historic photo of President Harry S. Truman outside the White House with two turkeys. Every year it’s distributed in the media, even though the turkeys were not pardoned. They were a gift to Truman from the Poultry and Egg National Board and the National Turkey Federation but were not pardoned.

Spend your Thanksgiving in the national parks visiting Harry S. Truman National Historic Site in Independence Missouri to see the photo up close. Then find out how our current turkey pardon tradition got started in 1989, with President George H. W. Bush.

Will you be taking in the famous Macy’s Thanksgiving Day Parade on the streets of New York City this year? Before or after your visit, stop at one of the many National Park units in the city. Salute George Washington outside of Federal Hall, stand in the shadow of the Statue of Liberty or tour the home of Alexander Hamilton as you celebrate the many reasons we can all be thankful for our country.

A visit to Shenandoah National Park in late November is just in time for the fall colors to make their last showing of the year. The Pollack Dining Room of the Skyland Restaurant on the park’s famous Skyline Drive offers one of the most popular Thanksgiving dinners in all of the National Park Service. The meal is served buffet-style with all the traditional Thanksgiving offerings and some local favorites. Reservations are recommended for this popular holiday meal.

Of all the offerings for Thanksgiving in the national parks, we think Olympic National Park might top the list. Spend the morning enjoying a hike through the Hall of Mosses. Then stop in at the Lake Crescent Lodge or the Kalaloch Lodge for a Thanksgiving Day buffet feast. And end the holiday with a sunset on one of the park’s famous beaches. What could be better than that? 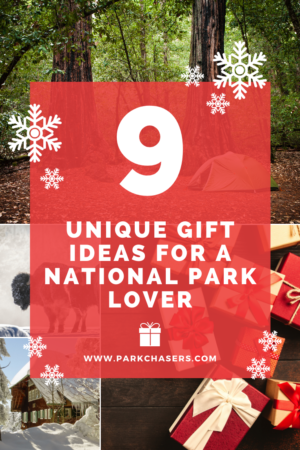